Have you been lucky enough to see the elusive Western Painted Turtle (Chrysemys picta bellii) in Alberta’s waterways? Get to know a bit more about these fascinating reptiles this Reptile Awareness Day! 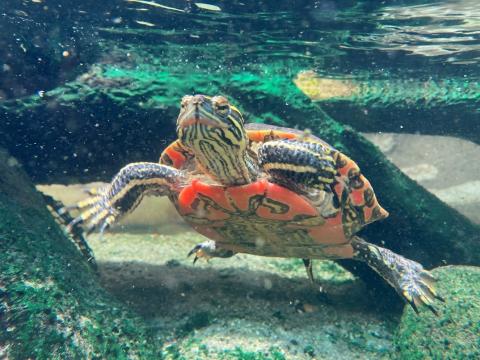 The Western Painted Turtle is Alberta’s only native turtle and the biggest of three sub-species of painted turtle found within Canada with a Carapace reaching up to 25cm in length. They are distinguished with markings from red to orange across the shell edge and body, and yellow stripes across the neck and head. This colouration often causes confusion with the popular pet, the Read Eared Slider (Trachemys scripta elegans), an invasive species not naturally occurring in Canada. However, it is illegal to keep native Western Painted Turtles as pets in Alberta.

In Canada, the Western Painted Turtle can be found as far as Thunder Bay, Ontario, in the east, across the southern areas of the prairies and the B.C interior, and as far west as Vancouver Island. In Alberta, they are found mostly in the Milk River drainage basin, with populations also in Cypress Hills and the upper Old Man River. They prefer to live in ponds, lakes, rivers, and slow creeks with a moderate amount of aquatic vegetation. Their diet predominantly consists of aquatic plants, insects, spiders, mollusks, crayfish, fish, and amphibians. 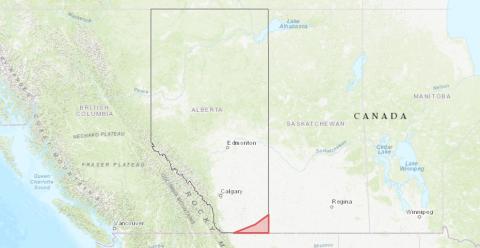 Approximate Range of the Western Painted Turtle in Alberta (Red)

The Western Painted Turtle begins to become active during the mid-spring period when water temperatures start to reach about 15°C. Being cold-blooded, the turtles have a habit of competing for premium basking sites in various places just out of the water. Basking is important to generate internal heat for the turtle, as their internal temperature needs to reach 20 °C s to be operational. During the winter, with dropping ambient temperatures, the turtles submerge themselves in the mud at the bottom of their waterbody of choice. Submerged where the water temperature will remain a stable 4°C, the turtles enter hibernation, slowing their metabolism and allowing them to survive long periods without activity.

Western Painted Turtles breed and lay eggs during the period of late May to early July. The female will dig a shallow nest in loose or sandy soils and lay a clutch of 5 – 25 eggs. Here, the newborn turtles may hatch in late autumn, but may also overwinter and emerge the following spring. These eggs can withstand temperatures as low as -11°C, and the sex of the turtle is determined by the incubation temperature of the eggs. Constant temperatures 29°C and above produce all females while temperatures 27°C and below produce all males. Few hatchlings reach adulthood. For those that do, the males will reach maturity at 8 years, while the females mature later, at 12-15 years. The average Western Painted Turtle's lifespan is believed to be at least 50 years old with some suggesting the possibility of 100 years. 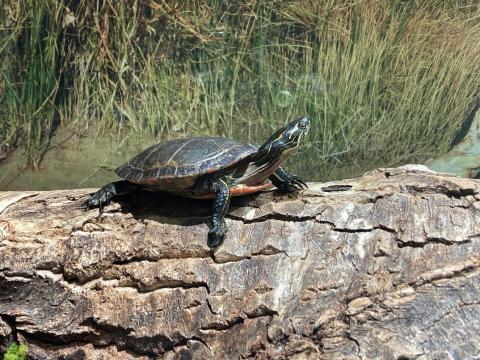 According to COSEWIC, the Western Painted Turtle faces habitat threats from water pollution, habitat fragmentation, wetland drainage, road mortality, increased predation, and introduced exotic turtle species. The Pacific Coast population has been assessed as threatened, while the Alberta population is listed as a special concern.

Visit the Wild Alberta Gallery in our Natural History Hall to see our Western Painted Turtles up close!