Get to know Garter Snakes

If you’ve spent much time outdoors in Alberta, you’ve likely come across a Garter snake. In fact, they’re the most common snake found in the province. In honour of Reptile Appreciation Day, we’d like to show a little love for these neat snakes.

All three species can grow to over a meter long and are the most colourful snakes in Alberta. Garter snakes will eat just about anything they find: small mammals, amphibians, and even invertebrates like slugs and earthworms. This makes them important mid-level predators, meaning they help manage the populations of these animals within the ecosystem while also being a much needed food source for other predators. They aren’t dangerous to humans, but when provoked may release a terrible smelling musk to drive you away.

Snakes are ectothermic (cold-blooded) animals, meaning they don’t produce excess heat in the way that warm blooded animals do. Come winter, they need to rest in conditions that keep them warm. Although quite mobile, the garter doesn’t migrate to warmer climates for winter. So how do they survive the frigid temperatures of an Albertan winter? Much like other animals here, they hibernate.

As temperatures begin to cool in autumn, garter snakes begin to seek out a warm place to take refuge for the winter. They seek out an underground structure to be their hibernaculum, in a rocky area, an old animal burrow, or man-made structures. If there is a wide enough gap, they may even make use of your home. Hundreds of snakes will go to these sites every year. The scarcity of suitable sites means that several species will all hibernate together. 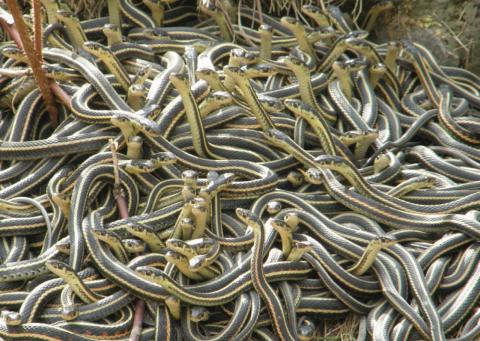 Come spring, they’ll begin to feel the outside warmth heating the hibernaculum and begin leaving. Given that this is the biggest gathering of snakes in the area, this is when garter snake mating takes place. Although some mating occurs in the fall, the spring exodus is when most mating occurs. Male snakes have been observed releasing female pheromones while moving away from the hibernaculum. Other males will follow this trail hoping to find a mate, but once lured away the deceiving male will race back and mate with as many females as it can before any competitors get the chance.

With human activity in wild spaces increasing, the availability of snake hibernacula is dwindling. If they are disturbed an entire region can have their snake populations shrink due to lack of mating and winter temperatures. Since many species of snake utilize these spaces, they are all at risk if one is destroyed. Because of this, they are protected under the Alberta Wildlife Act, even when not in use.