UP CLOSE: Stories, objects, and ideas from beyond the galleries

Get up close with history!

Our adult virtual talk series Up Close: Stories, objects, and ideas from beyond the galleries returns for 2022! Join museum experts to learn about research and collections projects, meet special guests, ask questions, and get up close with the fascinating stories of our collection.

Up Close virtual talks are free to attend, and take place from 12 - 1 pm on Fridays. Join us for one, two, or all of the talks!

Learn more and register to save your spot below. 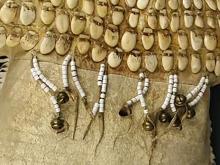 Indigenous girls and women have worn beautiful and precious polished elk tooth pendants for at least 2,500 years. A special dress decorated with them communicated the wearer’s place in their community and role in ceremonies. Given as a gift, it symbolized long life and enduring love. By examining twelve pendants recovered from archaeological sites and studying historic records, we’ve learned more about how these pendants were made, for how long, and the significance of these unique and special artifacts.

Karen Giering is Assistant Collections Curator of Archaeology at RAM where she manages the archaeological artifact collection. She has worked on archaeological projects in Alberta, the US, Greece and Cyprus. Karen’s research and publication interests include stone tools, bone tools, ceramics, rock art, and ancient plant foods. 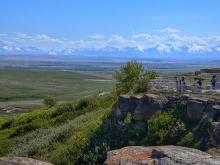 The landscapes have a story to tell. Hear the stories from an indigenous lens. Learn how the Blackfoot language and stories connects to the Great Plains natural world. In order to survive in these times, the ancient Plains people were dependant on understanding the environment and the behaviour of the Buffalo. One of the techniques derived from this knowledge was the Buffalo Jumps. An ancient hunting method herding up the animals, tricking and luring them to the edge of a cliff. For thousands of years, the ancient plains people survived by driving buffalo over steep cliffs including Head-Smashed-In Buffalo Jump, one of the oldest, largest, most used and best preserved Buffalo Jumps on the North Western Plains. Learn how the animals were processed and how the Buffalo contributed to the way of life of the plains people.

Join Conrad Little Leaf, Senior Interpreter at Head-Smashed-In Buffalo Jump as he takes you into the ancient past, sharing knowledge and stories from his ancestors, the Blackfoot plains people.

Conrad is a member of the Piikani Nation, one of the four nations that make up the Blackfoot Confederacy. Conrad was raised in an environment that provided him first hand knowledge of his ancestors, the Piikani, Blackfoot. Conrad’s journey has been focussed on education as he is a former teacher with the Calgary Board of Education and Director of Education in his home community of Piikani. Conrad is currently Senior Blackfoot Interpreter at Head-Smashed-In Buffalo Jump. 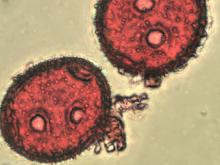 Piecing together the puzzle of past landscapes

Have you ever wondered how we know how the landscape, forest, and climate have changed over millennia? The answer is “proxy” data, which can be used as direct indicators of the past. For example, we can use preserved pollen in lake sediment to tell us about what types of plants were present hundreds of thousands of years ago. There are many types of proxies, ranging from chemical, physical, or biological. Each proxy is like a small puzzle piece; when connected to other types of proxies they help complete the puzzle so we can better see and understand what the past was like. The Quaternary Environments lab at the museum looks at preserved plant material as proxies of past landscapes. We also look at modern pollen to learn more about Alberta’s grasslands and native plants. Come and learn about the diversity of pollen and plant macrofossils, and how they and other proxies gathered from ice patches, lake sediment, pollinators, and mountain caves, can help us learn about Alberta’s past.

Diana Tirlea has worked as the Assistant Curator of Quaternary Environments at the Royal Alberta Museum since December 2012. She maintains the diverse collections including the Seed, Pollen and Tephra Reference Collections. Her research primarily focuses on the reconstruction of past landscapes in the Canadian Rocky Mountains during the past 12,000 years. She also works with modern samples, including counting 1000’s of pollen grains recovered from rangeland pollinators, such as bees and flies, to better understand pollination interactions in the prairies. Aside from working in the mountains, Diana has backpacked in the mountains for over 20 years and enjoys mountain photography and painting mountain wildflowers.

Boreal owls (Aegolius funereus) live throughout the boreal forest in North America and northern Eurasia. Though well studied in Europe, we know little about boreal owl prey and reproductive success in Alberta. To find out more, we installed 31 nest boxes to attract pairs of boreal owls to nest so we can monitor their nesting attempts and collect their pellets. By dissecting and separating the bones and teeth in the pellets, we can identify the species of small mammals that the owls are catching and eating. This helps us examine the relationships between prey, the landscapes around their nests, and owl reproductive success.

Corey Scobie (Ph.D.) has been Assistant Curator of Ornithology at the Royal Alberta Museum since 2014, where he prepares birds, helps manage the Ornithology collection, and assists with various research projects. Previously, Corey worked with Species at Risk in the grasslands of Alberta and Saskatchewan, where he focused on the effects of human development on burrowing owl movement patterns and reproductive success.

Collecting a pandemic: Why, how, and what

The COVID-19 pandemic is having a profound impact on the province. The Royal Alberta Museum began collecting objects right away to make sure the museum would be able to interpret that experience to audiences of the future. In this talk we’ll explore what is called “rapid response collecting,” and why it is so important to do it.

Pat Myers is the Curator, Work Life and Industry, at the Royal Alberta Museum. She has spent her career in heritage in Alberta, and has worked on teams developing historic sites, and preserving heritage buildings. She is the author of several publications on Alberta history, and contributed to the centennial history of Alberta, Alberta Formed/Alberta Transformed.

Berries and birds: Exotic plants altering the colour of birds

Many birds consume berries as a part of their diet, but what happens when they’re exposed to berries with new pigments from exotic plants? In the case of the Cedar Waxwing and other fruit-eaters, eating berries of the introduced Morrow’s (Lonicera morrowii) and Tatarian (L. tatarica) honeysuckles at the time of feather moult causes their bright yellow feathers to take a red colour. In this talk, Dr. Jocelyn Hudon will dive into his research into why this happens, how common it is, and what the consequences might be for the birds.

Jocelyn Hudon has worked as the Curator of Ornithology at the Royal Alberta Museum since 1992. Jocelyn acquired early a fascination for birds, particularly their gaudy colors. After obtaining a B.Sc. in Biology from Université Laval in Québec City, he went on to the University of Connecticut to study the evolution of carotenoid usage in birds, which earned him a Ph.D. He then spent 3 years at the Western College of Veterinary Medicine in Saskatoon, Saskatchewan, as a postdoctoral fellow, investigating the pigmentation of the iris of birds, before joining the Royal Alberta Museum. Jocelyn is interested generally in the nature and evolution of colour ornamentation in birds and is using a variety of techniques to help understand the origins of new forms.